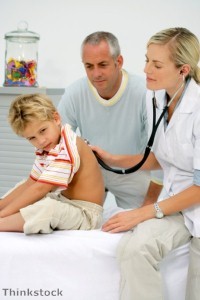 A new study suggests universal cholesterol screening for kids may be necessary, since current guidelines for screening children may be missing some youngsters who could benefit from treatment.

According to the Wall Street Journal, researchers found that among more than 20,000 fifth grade children, nearly 10 percent who wouldn’t be monitored under the current guidelines had abnormally high levels of LDL, or "bad" cholesterol.

Current recommendations say doctors should check cholesterol in children and adolescents when parents or grandparents have been diagnosed with heart disease prior to age 55, when family history isn’t known, or when a parent has total cholesterol over 240.

Fathers may want to hold off on giving their kids cholesterol-lowering statin drugs, however. A separate study done by researchers at the U.S. Centers for Disease Control and Prevention (CDC) found that very high cholesterol levels in kids may decline over time even without drug intervention.

Reuters reports that CDC researchers found that, after four years, 60 percent of kids who originally had cholesterol levels high enough to warrant the use of prescription drugs no longer needed them.

Experts say the results make the case for multiple screenings over time, before turning to medication.

In addition, an important parenting advice tip is to try feeding children a healthier diet and having them increase their exercise before turning to cholesterol-lowering medications.