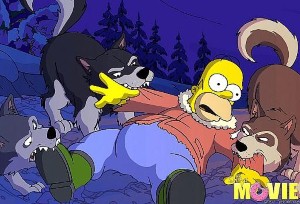 Admit it. Your dad sucked. And because of that, you want to avoid turning into that man you grew up with who spent most of his time yelling at the television and farting at the dinner table.

But where can one turn for examples of fatherhood? Homer Simpson knows. "Television! Teacher…mother…secret lover."

However, it seems that even the worst of TV dads have some redeeming qualities we can use to help raise our kids in the best possible way. Here’s a look at some modern TV fathers we can all learn a thing or two from.

Cameron from Modern Family
Cameron is a big guy with a big personality and a flair for the dramatic. He’s a new dad to recently-adopted Lily with his partner, Mitchell. What makes him a good dad is his willingness to jump in with both feet, no matter how outlandish it may be.

Although their family isn’t a traditional one, the relationship between Cameron and Mitchell, like that of many couples, is a good example of how personalities that balance each other and keep each other in check can make the best parents.

Dexter Morgan from Dexter
Every dad wants to protect his kids, but few do so by committing to killing off all the evil men and women in the world through calculated murder. Enter Dexter Morgan, Miami’s answer to the justice system that allows some criminals to fall through the cracks. While Dexter is technically a serial killer and may carry too many secrets, he excels where some days falter: being completely dedicated to his family. Who cares if it’s because it provides the best cover for his nighttime activities?