Joel Schwartzberg is the author of “The 40-Year-Old Version: Humoirs of a Divorced Dad”

He talks about his experiences:

My book is a first-of-its-kind collection of personal essays from the perspective of a divorced dad; the stories are quick, often 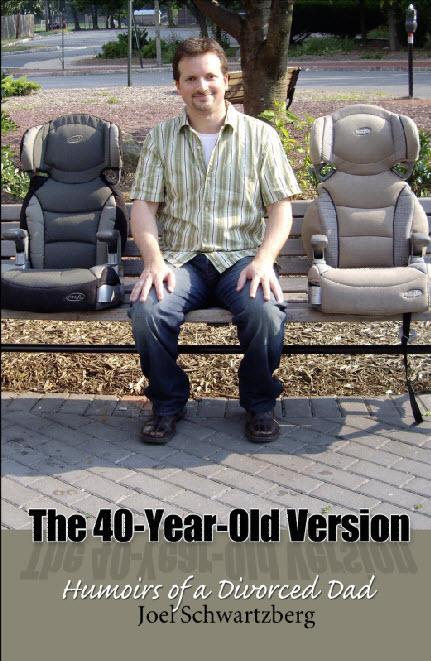 hysterical, relatable, and very meaningful. I believe it illustrates experiences that have not really been shared publicly before, but it also encourages genuine reconnections between dads and their kids.

The role of father has been proven crucial, especially given a divorce. Many divorced dads may feel like they’ve divorced their kids as well as their wives, but in reality it’s a golden opportunity to create a more real, more genuine relationship with their children, separated from others’ expectations of the kind of dad they “need to be.”

The best things a dad can do is just BE THERE — show a consistent commitment to spending time with his kids. Too many divorced dads feel like they have to entertain their kids, or see themselves as babysitters. They need to understand that, as long as they put in consistent effort, they are DADS. Period. Exclamation point.Dads of all stripes also need to discover their true “inner dads,” – not parent based on someone else’s values or expectations. Genuine dadhood is a glorious thing. Artificial dadhood leads to resentment.

Is there one practical tip you’d suggest to dads?

For divorced dads, to come up with their own house rules, not to be influenced by rules in the other home. Also – and this is for all dads – to find joy in simple pleasures. My kids love playing “shopping list scavenger hunt” at Kmart, organizing my socks and vitamins, and lazily watching TV with me on Saturday mornings. These are free, fun things that make me feel closer to them than had I brought them to the circus.

It’s been said that the greatest regret aging men have is that they didn’t spend more time with their kids.   How do you feel about that statement?

I don’t doubt that, whether the man spent one night a week with his children, or seven. But divorced dads should recognize that their dadhood is not defined by how much time they spend with their kids. Many divorced fathers see their children more often than dads in intact families. In my view, there’s no such thing as a “part-time dad.”

I always say this about parenting: Yesterday went by too fast and tomorrow never comes.

I feel modern kids face so much stress, pressure, and disappointment in their typical daily lives that there’s no need to purposely add more — as if adopting the antiquated notion that injury builds character. Kids who are “strong enough to handle the real world” aren’t kids who know how to bury emotions and throw punches; they’re kids who know how to maturely express themselves and their needs, show respect, treat others with kindness and fairness, and follow rules. These are kids who will stick up for themselves appropriately.

Smothering with love only handicaps children to be needful or “hooked on” constant over-attention; children also come pre-loaded with a bountiful storehouse of feelings, including unconditional love – No need to fill up that emotional reservoir. Also, parents don’t need to help kids feel love so much as they need to help kids – especially boys – express love.

The best things a parent can give his children are support, encouragement, and structure. Children need to understand their parents’ expectations; parents need to make those expectations clear.

One top way a parent can model good behavior for and encourage children is simply by taking the time to truly listen to them. I think kids love that, and need it for growth.

Has anyone inspired you to be a better father? If yes, who?

My Dad is ever-present in my life, whether with me in person or not, as a symbol of parental devotion and sacrifice. He’d do anything for me, and that’s what I learned from him. But my biggest inspirations are my own kids. They make me feel good as a father, while also constantly inspiring me to be a better one. They remind me that, more than a father, I’m a dad. The former is defined by society and the IRS; the latter is defined through the eyes one’s own children.