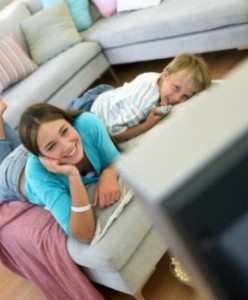 You probably weren't planning on unlocking your cabinet of PG-13-rated movies until your kids earned their stripes as veritable teenagers, but have you ever considered that children aren't necessarily born into a natural state of 'parental discretion advised'?

Many parents don't worry about their infants or toddlers catching a glimpse of action on the big screen (or TV), reasoning that their innocent youngsters won't make heads or tails of what they see. But, you may wonder, when do babies finally put two and two together on the tube?

According to researchers at Vanderbilt University, toddlers tend to use the information they see on the screen if they have a means of directly relating to the character (think Blues Clues, not Look Who's Talking Too).

"We found that if children gave evidence of treating the video as a social partner," researcher Dr. Troseth told The New York Times, "they will use the information."

The major takeaway from this finding is that young kids and babies are much less likely to process what they're watching if there's no game or dialogue to follow. The best rule of thumb? If you're at all worried about the stuff your kids may be exposed to on the screen, stick to what's G-rated when the youngsters are in the room.