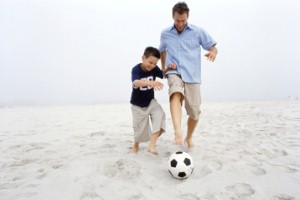 As a father, you've probably heard the old saying that girls are more difficult to raise than boys. In fact, when you first found out your wife was pregnant, we're willing to bet the majority of you probably (and secretly) wished that your new baby would be a boy. This situation has been recreated time and again in popular TV sitcoms and romantic comedies – the soon-to-be father dreaming of playing catch with his son, teaching him the finer points of car repair and celebrating when his boy eventually wins the Super Bowl.

Sports and other manly activities aside, why is that that people believe boys are somehow less difficult to raise than girls? It seems that the answer lies with sex. After all, a father's biggest fear for his daughter may very well be that she'll come home pregnant as a result of some momentary lapse of judgment.

However, is the inability to become pregnant really that advantageous for boys and their fathers? It turns out that a 2010 study by the National Center for Education Statistics found that 8.5 percent of males 16-24 had dropped out of high school, as opposed to only 7.5 percent of females. A similar report by the U.S. Department of Health & Human Services showed that boys 12-17 years of age were 50 percent more likely to be the victim nonfatal violent crimes like assault, robbery and homicide. This statistic increases as boys get older.

So are boys easier on fathers than girls? The data may show otherwise. As a result, fathers should make sure they're setting a good example for their sons – who are far more likely to become victims and victimizers than girls – during developmental years.