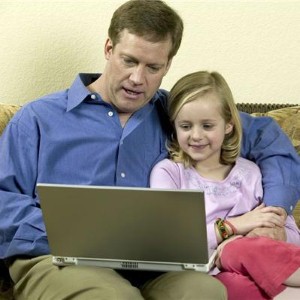 As parenting skills, roles and expectations continue to evolve, an increasing number of stay-at-home fathers have been choosing to make their stories public.

A new film, entitled Happy SAHD: A Documentary about 21st Century Dads, explores this very topic through the lens of a group of Baltimore fathers who provide primary childcare for their kids.

Director Michael Schwartz told Charm City Moms, a blog in the Baltimore Sun, that he spent a year following these men, recording their struggles and joys.

He said that stay-at-home dads (SAHDs) face several stereotypes and assumptions in their role, particularly from moms, who tend to assume the men have been temporarily been put in charge by their wives.

"These dads love taking care of their kids," Schwartz said. "And despite the funny looks, odd comments and even disdainful glares, they are happy being SAHDs."

Chris, the founder of the Baltimore group, suggested that fathers in this role may be "less guarded and more secure" because they have chosen an alternative path, Schwartz added.

According to the most recent U.S. Census data, there are approximately 159,000 stay-at-home fathers in the country, but experts suggest the figure is actually much higher.