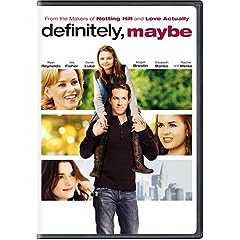 I have a major problem with the PG warning. It provides so little guidance for parents as to what actually is in a movie. I will let my 8 year-old daughter watch many PG-rated movies, especially if we’re on a plane or even if the theme looks romantic but somewhat adult. At this age, she pretty much ignores what she doesn’t understand, though that is changing very quickly. There is so little time these days, that often, as parents, you end up watching a movie with your child rather than pre-screening it to make sure it’s right. I’m not saying this is the optimum strategy, but sometimes it just happens. Last night, I got a major dose of why you always need to screen a movie, check our ratings, or go to CommonsenseMedia.org to get the complete scoop on a movie.

Definitely, Maybe is definitely a movie on which I should have done more research. While the plot idea seems like it would be cute: early middle-age man tells ten year old daughter how he met her mother and fell in love, their conversations are way too frank both for the main child character and for a little girl my daughter’s age. Within literally five minutes of the start of the film, the dad picks up his daughter at the first day of sex education at her school. Immediately, dialogue refers to “putting a penis in a vagina.” My daughter knows what these words mean, but I don’t think she’s yet heard them in this context, and I certainly didn’t want her to hear about them in this movie. We skipped ahead to the next scene, but it just went downhill from there. The movie was over in fifteen minutes.

All in all, a seemingly cute film for my wife and I to watch later, but not recommended for kids under about twelve.