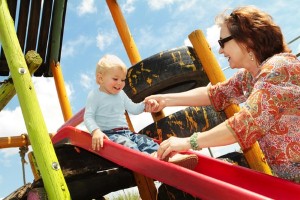 For parents who work, daycares can be a godsend. However, new research sheds light on an alarming trend that might make dads think twice before they drop off their kids. A study conducted in Ohio found that the majority of centers ignore the guidelines about television exposure laid out by the American Academy of Pediatrics.

The researchers found that 69 percent of daycares had a TV that children watched an average of four times a month. While certain educational programs hold real value for children, and even the little ones will likely benefit from a few moments of relaxing in front of the tube, some experts suggest that too much screen time might impact a child's development.

"When children are plopped in front of the TV, they can be missing out on what's more important for social and language development: social interaction," Dr. Rahil Briggs told HealthDay News.

Many dads are aware of these concerns and actively working to limit their children's screen time. Those who want their children to develop organically without experiencing the possibly detrimental effects of too much television should ensure that their youngsters won't be parked in front of the TV during daycare hours.

When deciding on a daycare for your child, in addition to the appropriate certifications, be certain to interview the daycare providers about how the children spend their time. A location that aims to foster creativity through arts and crafts, and one that keeps kids active through physical activity and play, will not likely utilize the TV as a tool to keep kids occupied.