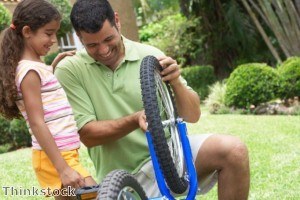 New research gives another reason why it's important for fathers to be present in the everyday lives of their daughters.

Researchers from the University of California have found that girls who live in homes without a biological father are more likely to hit puberty at an earlier age, putting them at a higher risk for chronic illnesses, including breast and reproductive cancers.

Previous studies have confirmed that girls are maturing earlier in recent decades, but up until now have explained the change as a result of increased body weight.

"While overweight and obesity alter the timing of girls' puberty, those factors don't explain all of the variance in pubertal timing," said the study's lead author Julianna Deardorff. "The results from our study suggest that familial and contextual factors – independent of body mass index – have an important effect on girls' pubertal timing."

Scientists found that the absence of a biologically-related father was linked to earlier breast development for girls in higher income families.

While the reasons behind the findings aren't clear, evolutionary biologists theorize that the absence of a biological father may signal an unstable family environment, leading girls to enter puberty earlier.