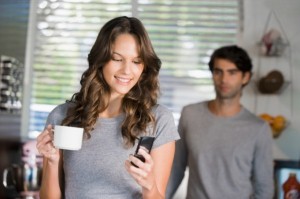 These days, being friends with your kids on Facebook just isn't enough. The discerning father should know how to read between the lines of every status update, wall post and "like" – because let's face it, Facebook is relatively new, but cryptic, parent-evading slang isn't. Here are seven Facebook sex terms that dads should keep their eyes peeled for.

1."8." Sometimes used in text messages too, this is an abbreviation for "ate," or oral sex.

2. "Brown out." While its slightly darker cousin, the black out, is something that most generations are familiar with, the young ones are developing some sophisticated nuances here. Browning out refers to when you're still somewhat coherent enough to recall the past night's events – albeit with a lot of effort.

5. "FB." This could also just mean "Facebook," but social networking sites and "eff buddies" are generally not interchangeable, so be the wiser and check the context.

6. "Hook up." This may seem rudimentary, but it's what the kids these days are calling it. It's highly unlikely that this word refers to good, clean collaboration anymore.