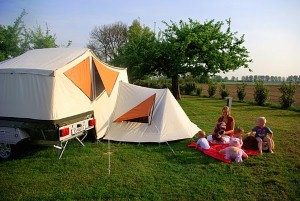 Despite the fact that there's a noticeable autumn chill in the air already, the beautiful summer weather isn't gone just yet. If you're hoping for one last foray into the wilderness, planning a late-summer/early-fall camping trip with the kids can be quite the adventure. However, it's important to stay on top of the more hazardous aspects of Mother Nature, particularly poison ivy, to keep your little ones safe. Assume you know enough about this toxic plant to steer clear of danger? You might not be as prepared as you think…

Poison ivy comes in two forms
"Leaves of three, let it be," as the saying goes about poison ivy, but did you know that this plant can take another form as the seasons shift? In autumn and winter, those shiny greenish-red leaves disappear, but poison ivy can still hang around as a large, hairy vine, which is equally toxic upon contact.

Oils spread, not the rash itself
It's generally not a good idea to touch or scratch skin affected by poison ivy, as this can cause it to become infected or irritated. However, this alone won't cause the rash to spread. Only the sticky oils can spread poison ivy around you or your children's bodies, so beware when first coming into contact with this plant.

Don't burn it!
Whether you're in a state park or your backyard, you might be tempted to clear out a patch of poison ivy to avoid further damage. However, you should be sure not to burn these plants, as this can vaporize the oils and release them into the air to be inhaled. The same goes for any clothing covered in the oils.