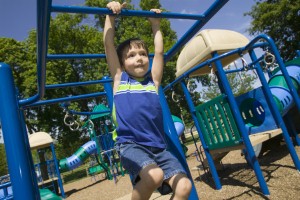 Spring has sprung and with it kids are spending more time outside. Studies have found that more time spent playing outdoors has been proven to increase the incidences of outdoor-related injuries. Experts say there are several things fathers should stock their first aid kit with to deal with the cuts, scrapes, bruises, bug bites and other injuries their kids may suffer.

Whether you buy a pre-made first aid kit or put one together yourself, it should contain an assortment of bandage supplies including gauze, bandage tape, scissors and band-aids, according to KeepKidsHealthy.com.

"While it’s necessary to have bandages and anti-bacteria cream readily on hand, it’s equally important to have something to protect the wound against water when bathing, and dirt, grime and sweat when playing," said orthopedic surgeon Dr. Matthew Jimenez.

In addition, experts say first aid kits should include medications such as ibuprofen and acetaminophen as well as an antihistamine in case of allergic reactions.

And, tweezers can be used to remove splinters and ticks and tongue depressors can be used as splints for broken fingers, if needed.