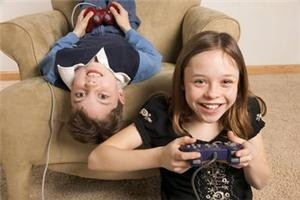 We've all heard the ruckus about video-games desensitizing children to the dangers of real-world violence. And while it's undoubtedly true that certain games like Grand Theft Auto are not to be played by the younger crowd, discerning fathers should also realize that all games are not created equal. While some choices may have a negative impact on your child's psyche, others may be a catalyst for healthy inspiration.

Though you may be thinking, "I'll just buy educational games for my kids!," recent studies have shown that action-packed titles can also have a positive effect on neurological development. According to the May 29 issue of Nature, "people who play action video games can process visual information more quickly, and can track 30 percent more objects,ac than non video-game players." This means that they can effectively "see" and process 30 percent more than their non-gaming counterparts. Think about that for a second. If your son is crossing the street, he may have a better chance of seeing an oncoming car. If your daughter is biking on the sidewalk, she may be better able to spot that large pothole and avoid it.

Additionally, while all action titles may not be appropriate for children, there are some classics that will engage your kids and possibly even leave you begging for more. One example of this is the Super Mario franchise. While there is some violence in the series, it is largely comical and cartoon oriented, and probably no more damaging to your child than an afternoon spent watching Looney Toons.

It is ultimately your decision as to which video-games you allow your children to play. However, it's important to keep in mind that certain "violent" video-games are no more violent than a reading of Huckleberry Finn or Robin Hood. Play the games yourself before handing them off to your kids so that you can confidently decide whether they'll foster creativity and promote awareness, or just lead to trouble.