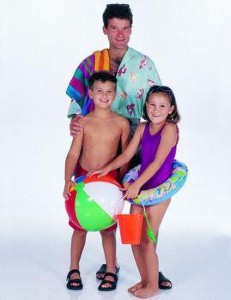 Most kids growing up in a two-parent household discover early on that mom and dad are different. Want to borrow the car but mom says no? Maybe dad will give in. Mom always lets you have an extra piece of chocolate cake after dinner, but dad says no candy until you've eaten all your broccoli. And rule-making isn't the only place where moms and dads differ – traditionally, they've held very different roles in making the family unit work. But what about single-father families or other non-traditional arrangements? Can a dad ever become a mom?

According to the U.S. Department of Health and Human Services' Administration for Children and Families, fathers have a unique role to play in their children's lives – one that's separate from, but equally important to, a mother's role. The organization suggests that dads who are involved in the lives of their kids – and, whenever possible, in the lives of their kids' mother – raise families that boast better educational outcomes, more functional relationships and better-behaved children.

"Even from birth, children who have an involved father are more likely to be emotionally secure, be confident to explore their surroundings, and, as they grow older, have better social connections with peers. These children also are less likely to get in trouble at home, school, or in the neighborhood," the department's website explains.

So while you may not ever be able to replace a mom, your presence as a father is every bit as important as a mother's – even if it's slightly different (After all, you're probably still expected to do the bulk of the household bug-killing, especially if you have daughters).