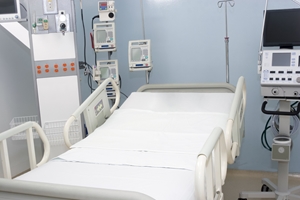 Dads to be. Listen up because I’m about to drop knowledge on you that no one told me. My only hope is that you embrace this truth and hold it close. It could save your life.

1. There Will be Blood (and Poop)
I know you know where babies come from, but what you don’t know is HOW they come into this world. There is pushing and yelling and poking. And before the head even makes an appearance, there is blood.

Keep this in perspective. A woman is pushing out a 4 to 8 pound human out of their body. There will be tearing and blood will be everywhere. EVERY. WHERE. Also, since an epidural numbs a woman’s body to some of the pain (yes, the operative word here is some), it’s also possible for her to push other things out in the meantime.

Pro Tip: If she asks you if she pooped lie, and say no. You also have to look so she believes that you are actually checking. Just say everything is fine.

2. Don’t Cross the Birth Barrier and Look “Down There”
Picture this. The woman you love is on her back and breathing hard because she just pushed your massive child out of her body. She tells you to run over to the baby to take pictures of their first moment in the world. In order to do this, you have to walk around the bed and in front of her.

Do not, under any circumstances, look into the actual birth area. Just don’t. And I realize that by saying this I’m only heightening your curiosity, making you to want to look even more. Fine, go ahead. Be aware that it will be a war zone and you may not recover from the image you see.

“But is it really that bad?”

Yes friend. It is.

You want to know what it’s like? Remember that time you felt really constipated and you ended up on the toilet for like an hour? Multiple that by a million with a side of getting kicked in the junk. And now you’re bleeding everywhere and someone is hunched over stitching you up. That’s what it’s like.

3. Take video. No, not of the birth.
You may be wondering why I’m advising against a birth video. Those memories are better played back in your mind, mainly because your brain is smart enough to sanitize it for you. You don’t need video footage of that moment. You have to be present, looking into your wife’s eyes and be close enough so she can punch you in the face when she needs to. And she will.

No, I’m talking about a video of your baby’s first cry, of how your wife sounds when she first holds her child and of how you look when you touch your first born’s toes. While I have these moments as images, I kind of wish I had a video of them too.

Your go-to will be to take a million pictures, but try to take some video too.