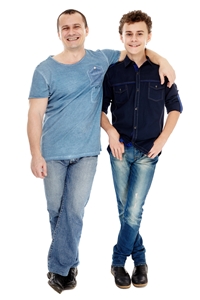 Dating is a milestone for every father and son pair, and though you're likely brimming with advice, stick to the basics. After all, he only needs tips that pertain to his situation.

Don't rush
If your son has a crush on someone, let him know that he should start the relationship slowly – with friendship. This way, he can get to know the person better and assess whether he's truly attracted to the individual.

In cases where your son truly is attracted to a person, encourage double dates. After all, it's an activity that he'll likely participate in sooner or later, so learning the social skills to interact with friends and a significant other at the same time will prepare him for later years.

Communicate fairly
As with any relationship, it's essential for both parties to talk and listen on mutual grounds and in comparable amounts. Neither your son nor his significant other should take up the bulk of conversation. Both people should be comfortable expressing their emotions.

At some point, your son may have hesitations about the person he's dating. Help him analyze his feelings and let him know that he should share these thoughts with his loved one. After all, relationships are a two-way street!