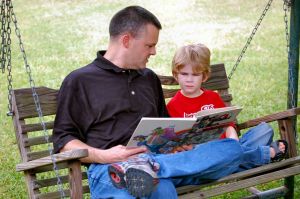 A University of Illinois study has found that a dad who plays an active role in the early years of his kids’ lives tends to continue his involvement when the kids begin school. The study involved 390 children and their families from the Child Development Supplement data set of the Panel Study of Income Dynamics. Its main aim was to explore the effect of parental involvement on student performance.

Brent McBride, a U of I professor of human development says, “If we want fathers to be involved in school, we need to focus on men building close, loving relationships with their children in the preschool years. When fathers do this, they’re writing a script that says they’re involved in their child’s life, and their expectation is that they’ll go on being involved in that child’s life.”

The study shows that it is important for dads to communicate and build trusting relationships with their kids when they are young as they might not get the same opportunity later on. “If fathers wait to seek a closer relationship with their child until later in the child’s life, the moment has passed,” McBride said.

It is also important for child-care providers and teachers to realize that a dad’s role in child development is not as scripted as that of a mother. McBride says, “We need to train teachers so they’re comfortable communicating with men as parents.”