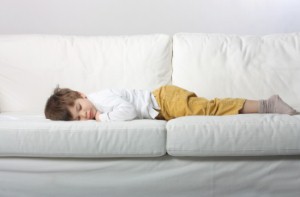 As your children grow and develop, you may notice changes in their usual sleep routine. Young children may take a nap or two throughout the day, while older adolescents often stay up during all hours of the night and sleep into the afternoon.

As a dad, these fluctuations can make encouraging regular bedtimes for healthy levels of sleep difficult. However, a phenomenon known as "night terrors" can be even more alarming and raise questions about physical and psychological health. While night terrors can occur in adults, they are most common in children ages three to seven – particularly boys, according to the U.S. National Library of Medicine. Unlike nightmares, people rarely remember experiencing night terrors, which can cause them to scream, shout, thrash around and act panicked before returning to sleep as if nothing happened.

If your child suddenly starts experiencing night terrors, you may be concerned that this is a sign of mental illness, depression or some other unknown health issue. Rest easy – while they may be disconcerting to witness, night terrors are not an uncommon occurrence. In fact, frequent night terrors are often genetically inherited, so chances are you or someone in your family has also encountered them before. The cause of these disturbances can often be linked to stress caused by recent changes in a child's life, which can range from being overtired, new medication or simply sleeping in an unfamiliar location.

While you might feel the need to intervene during a night terror outbreak, it's generally better to leave your child be – just as you would with someone who is sleepwalking or sleep-talking. Waking a child in the middle of a terror can actually cause them to feel more alarmed and confused than if you had let them sleep. Your best bet in alleviating this frequent occurrence is to establish a comfortable sleep routine and reduce the amount of stress your child might be experiencing. Remember, night terrors are frightening, but not dangerous, and often children will grow out of them.