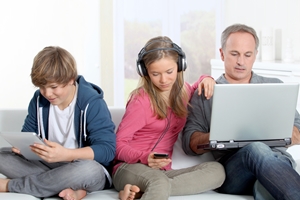 As I’m sure you’ve noticed, in our technologically advanced society we’re constantly engaged with all kinds of devices and bombarded by every sort of media imaginable. However, this onslaught isn’t only for grown adults, but also for children, who are still learning about the world around them.

A recent study has shown that kids ages 8 to 18 spend more than seven and a half hours a day engaging with media, almost all of which is provided electronically. The jury is still out on how exposure to technology is beneficial or harmful for children. So far, there’s evidence for both advantages and detriments in child technology use.

As a father, you find yourself in a kind of double-bind. Too little exposure to technology could leave your kids out of touch with the times they are and will be living in, but too much exposure could lead to difficulties developing certain cognitive and social skills, not to mention the risk of missing out on some important aspects of childhood.

4 technology rules to live by
Just how much time your kids spend with technology will ultimately be up to you to discern, but some general guidelines could be beneficial.

1. Limit leisure use to an hour or two. Some play time on the computer or watching television probably won’t hurt too much, but spending 50 percent or more of the day looking at a screen isn’t likely to be good for your kids, or their eyes at least.

2. Set an example. Kids look up to their parents. Keeping a handle on their technology usage will be difficult if you yourself are constantly absorbed in a device.

3. Have them pay for their own devices. This is a great way to build responsibility as well as keep tech exposure within limits. A family computer may be a must, but a tablet or smartphone isn’t a necessity, least of all for very young children.

4. Spend time with your kids. I know, this is obvious, but doing non-electronic activities with your kids can be a great way to bond, especially if they involve physical contact. If you’re OK with a little compromise, consider joining your kids in their digital play and use the occasion as a chance to relate.