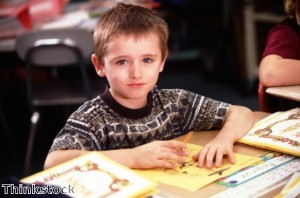 The debate on whether or not spanking your children is an effective means of discipline has been widely argued. Overall, experts say spanking may work in the short-term but won’t change long-term behaviors and may end up causing other problems.

According to Reuters, a new study on the subject has found that kids who are spanked are twice as likely to become aggressive than kids who aren’t.

Experts say fathers should focus on different non-physical ways of disciplining their children in order to see results.

One parenting advice tip for disciplining your child without spanking is to use the time out system. Generally, younger kids who misbehave will have a short time out in a designated spot where their parents or caregivers can see them. Older kids can be sent to their rooms to think about their behavior. Regardless of your child’s age, it’s important to discuss why they were punished and what you expect from them going forward.

Another way to discipline your child is to take away a privilege. It’s important to know your child and what you can take away in order to get results, whether it’s eliminating TV, computer or video game time for a day, taking away a favorite toy or forbidding playdates for a while.

When it comes to discipline, experts say the most important thing parents can do is to be consistent. Once you figure out what works for you, stick with it! And, remember to walk away to "cool off" if you become overly angry.