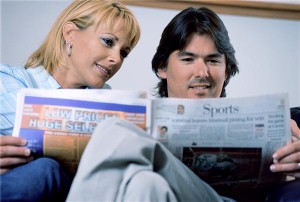 Any father who has been through the first few months of parenthood knows that the learning curve is steep and every day brings a new challenge.

Receiving regular newsletters filled with parenting advice could help ease the stress that accompanies these new arrivals, a new study from the UK suggests.

While the research was conducted among first-time mothers, the researchers propose that both moms and dads could benefit from receiving the newsletters, which include tips on strengthening their parenting skills, Reuters reports.

The findings, published in the journal Pediatrics, report that after one year of receiving regular newsletters, participants were less likely to feel stressed than those in a control group.

Lead author Dr Tony Waterston of Newcastle University said that the information contained in the newsletters helped subjects "understand their infant better," including what to expect from their first 12 months.

Receiving the publication "holds considerable potential as a means of improving parent-child interaction and thereby relationships in later childhood," the authors wrote.

Another way that many new and prospective fathers educate themselves about their role is by reading fathering websites.