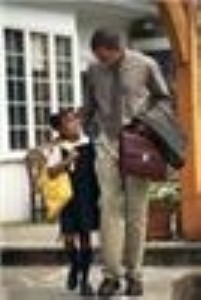 As the first day of school draws near, dads across the country are planning to get their kids off on the right foot by taking them to their first day of classes.

For some, the effort was inspired by the Black Star Project’s Million Father March, which encourages men to use their parenting skills to actively participate in their children’s education.

Phillip Jackson, executive director of the Black Star Project, told the Charlotte Post that this commitment is vital for kids’ development.

Willie Wright of Capitol Heights, Maryland, told Gazette.net that being there from the beginning makes a difference.

"As a father, I want to be there on the first day to set the tone for the remainder of the year," he said.

This parenting advice follows the results of a survey by GreatSchools, which found that fewer than half of parents had plans to meet their child’s teacher.