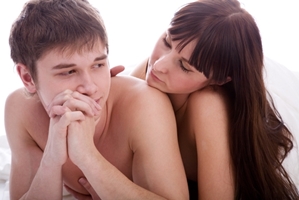 The arrival of a new baby can be both joyful and terrifying for any couple. Finding a balance between those emotions became a little more difficult last month, when researchers unveiled advice that newborn babies “should share their mother’s bed until age three,” because it’s good for their hearts.

That practice may benefit children’s health, but the news doubtless triggered a wave of heart attacks in new dads across the country. Few things are tougher in fatherhood than preserving an intimate bond with your wife after a new baby arrives, and this study didn’t do us any favors.

The list of challenges to nurturing a healthy sex life include distraction, exhaustion, nursing and abject terror at the thought of conceiving any additional children. Oh, and one more thing – tossing a baby in the bed along with the two of you.

Also known as “co-sleeping,” the practice of adding a baby to the marital bed effectively nullifies any new father‘s chance of sharing physical relations with his wife.

But wait, it gets worse. Those diabolical researchers drove a second nail into every father’s hope of nuptual nookie when they cited a second conclusion. Failing to follow their advice means that young kids will sleep alone, and they believe that could lead to bad behavior as the child grows up.

Hammering a third nail into hopes of marital bliss, the satanic researchers added a final statement that sleeping alone makes it “harder for mother and child to bond and damages the development of the brain.”

So what is a desperate dad to do?

Here are six tips for sustaining a sex life as a new parent, and saving your marriage while you’re at it.

1. Reality check. Raising babies is a blissful task, but it’s overwhelming work. However much you may have frolicked like young bunnies before you had kids, it’s time to adjust your expectations and try to dial back the libido a few clicks.

2. Place. So the bed’s too crowded with an extra critter on the pillow? It’s time to get creative on location. Put the kid down for a catnap and head for the guest room or the living room couch.

3. Time. Babies sleep on their own crazy schedule. That means that sometimes randy parents have to change their habits, seize the opportunity and have spontaneous sex.

5. Grandparents. Finding a babysitter to watch newborns is a grand challenge, but no one can handle it like grandma and grandpa. Even if it’s just one time per year, line up the sitters, book a room at a local hotel and enjoy a steamy staycation.

6. Teamwork. It can be hard to remember sometimes, but you and your wife are in this together. So keep communicating, talk openly, and team up to find solutions.