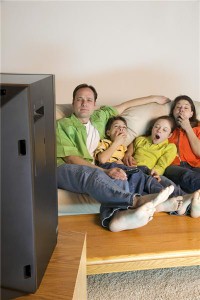 A new study has found children who watch a lot of television are more likely to be aggressive. According to Reuters, researchers at the University of Albany and State University of New York at Rensselaer say just having the television on, even if kids aren’t watching it, can also increase aggression.

The children involved in the study watched an average of three hours of TV each day, while the sets in their houses were on for an average of five hours each day. Both types of viewing – active and inactive – were associated with aggressive behaviors like hitting others, having angry moods, being disobedient and screaming a lot.

The American Academy of Pediatrics recommends parents limit the amount of screen time their kids have every day. Children under two years of age should not watch any TV, while older kids should be limited to two hours each day.

Among the parenting advice offered to fathers with kids who watch TV is to watch with them to discuss what they’re viewing and offer insights and lessons from the programming. The American Academy of Child and Adolescent Psychiatry says parents should monitor what shows their kids see and refuse to let them watch anything with violence. Turning off the TV while violence is playing out sends a clear message that it’s not okay to watch and/or mimic these types of acts.

The best way to keep kids away from the television is to engage them in other activities. Dads can suggest taking a walk or playing a game together instead of watching television. Remember that time spent together is a great way to know what’s going on in your kids’ lives and to discuss and modify behaviors that are alarming.