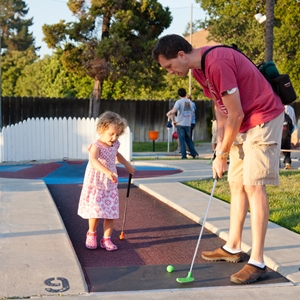 Both my wife and I are huge sports fans. So it goes without saying that we're at the very least going to see if our daughter is interested in sports as she grows older. If she doesn't like them, oh well. But I've always looked forward to a time when I could be her basketball or softball coach, and create that father and daughter bond.

But as a fairly un-athletic person, I also know that if she sticks with any sport long enough, she's probably going to be able to beat the pants off me before long – and I'll need to make sure both of us are ready for that.

Setting the stage – Having fun > Winning
While my wife may treat things differently, I'm not going to just "let my daughter win." She'll know when I'm not trying as hard as I can, and that will cheapen things when she actually steals the ball from me or nails a 3. I'm not going to shove winning in her face, but I want her to feel the rewards that come from victory through hard work.

I also don't want to turn into a father who is so hyper-focused on winning that my daughter stops having fun with whatever she's doing.

My mother always tells this story about me and the "need to win." Growing up, we used to play Candy Land all the time. After a while, I understood that if just the two of us were playing, I would get every other card in the deck – and because I really wanted to win, I would take the cards and stack them the way I wanted. Yes, at 4 years old I cheated in Candy Land.

For a time, she let it continue. After all, the game was over quicker. But then she taught me a lesson. I had stacked the deck the way I wanted, and then went to the bathroom. While I was gone, my mother took the deck, and re-stacked it so I got right near the end… and then got sent back to the beginning. I learned my lesson, and stopped cheating.

Use gradual steps to foster genuine growth
While you can't expect your child to be your equal at games/sports right away, look for ways they can win, and be competitive with Dad. First, you can play games where the outcome is random – such as Chutes and Ladders, Life, or anything where the outcome is determined by dice.

For strategy and skill-based games, tell them that your age/size/experience may give you an advantage, so they understand that they may not be able to win. If you choose, give them a small handicap – but make it clear that you're not changing the rules, just evening the playing field. As your child gets better and better, start ramping down the advantages until you're playing on even ground.

Think about yourself too

You also can't ignore the fact that being beaten by your child is going to be an emotional issue in fatherhood. If your child is regularly wiping the floor with you, you might be discouraged. But you need to understand that it's a natural progression. NEWS FLASH – You're not 20 any more, and your body knows it.

I'm sure I'll take that moment as a motivation to get back in the gym, and start taking better care of myself. I also know that even if she can beat me at one thing, I can try to develop her skills in other areas. That way, even if she beats me sometimes, she can still have fun, stay humble, and end up as a well-rounded adult.