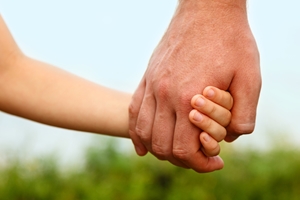 Sometimes in fatherhood, you have to take over the patriarchal role from another dad. This can put you in an awkward position that's tough to overcome, so here are some tips to help you out along the way.

Support openness
Some children may feel that they can't be open and honest with you because you're not their biological parent. It'll take time, but encourage them to come to you with any problems or feelings they might have.

Convey leadership
You don't want to be a dictator, but you and the kids need to remember that you're in charge. You may not be their father, but you should act and be treated with similar respect.

Keep them free
Although you're the leader, you can't force the relationship on them. Let the kids slowly figure out their pace for building the relationship. They shouldn't feel pressured or forced to share affection or involvement with you. Allow it to build over time, and foster it into something worthwhile.

Step aside for discipline
It'll be hard at first, but you need to allow the biological parent to discipline the kids in the beginning Without their respect, they'll feel like you're a controlling stepparent who doesn't care about their best interests. Take a backseat in the beginning and slowly work your way to the front.