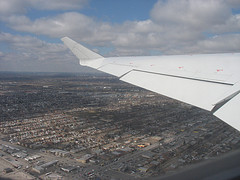 As a dad flying with a pregnant wife, you have to wonder if it’s safe to hit the friendly skies. Flying sounds like a perfect storm of strangely described cabin pressure, bizarre foods, cramped quarters, bad air and lots of stress, none of which sounds good for mom or baby. The bottom line is that the risk is small until 36 weeks, as an article in today’s New York Times explains. After 36 weeks, risks increase for going into labor on-board, which is definitely not recommended. Read more in today’s New York Times article: The Claim: Flying Increases the Risk of a Miscarriage?

THE FACTS: Hopping on a plane and flying for hours at a time is generally considered more of a nuisance than a health concern. But when it comes to a woman who is traveling for two, are the stakes a little higher?

Some scientists have speculated for decades that frequent flying can heighten the risk of complications during pregnancy, arguing that low levels of oxygen, increased exposure to radiation and other conditions aboard some aircrafts may harm a developing fetus.

Over the years, a handful of studies have examined the claim, but so far none have been able to confirm it. One of the more extensive studies was published in 1999 and focused on flight attendants.

From 1973 to 1994, the study examined the medical records and work activity of 1,751 pregnant flight attendants. The study, published in The Journal of Occupational and Environmental Medicine, did not find high rates of complications.

It did find that the flight attendants who worked during the early stages of pregnancy had a slightly higher risk of miscarriage than their peers who took time off, but it was unclear whether undue stress or various other factors were to blame.

After reviewing years of research, the American College of Obstetricians and Gynecologists released a report in 2001, saying that healthy women could safely fly any time before the 36th week of pregnancy. After that, they risk going into labor during a flight.

The report also found that radiation exposure for the typical pregnant air traveler was minimal, and said that the low pressures in the cabin were not likely to affect oxygen supply to a fetus.

THE BOTTOM LINE: Air travel during pregnancy is considered safe.